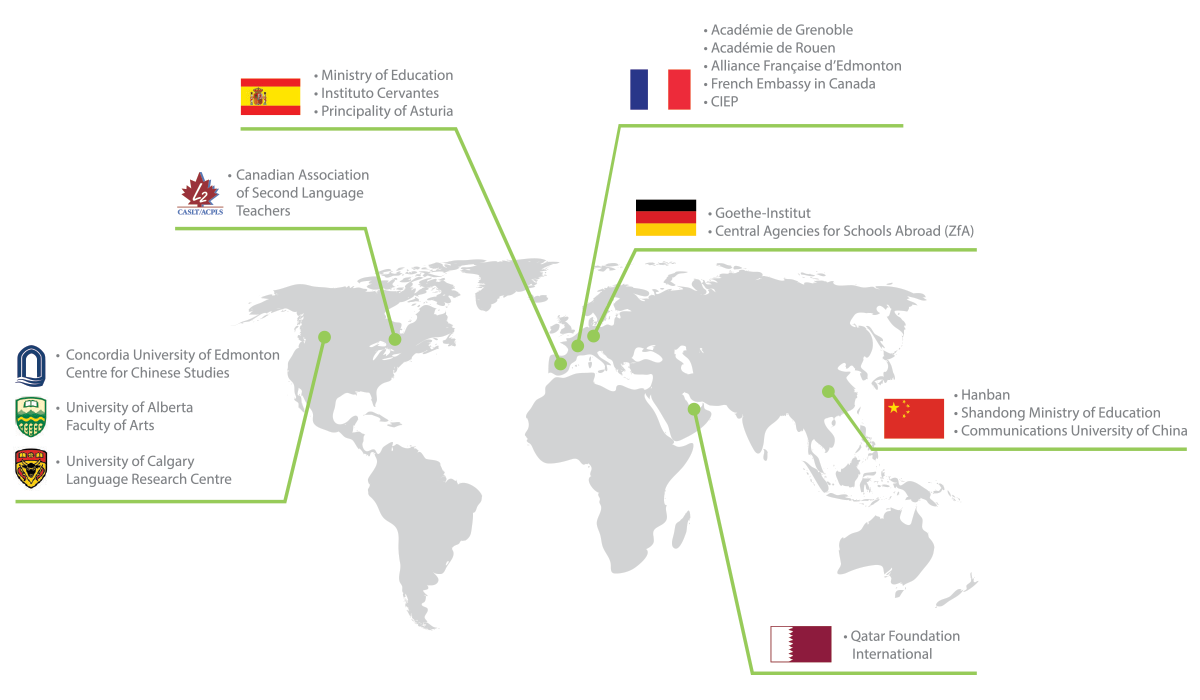 The Institute for Innovation in Second Language Education (IISLE) at Edmonton Public Schools has partnerships with key stakeholders from around the world. Brief descriptions of those partnerships are listed below.

1. The Confucius Institute in Edmonton was established in 2007. This agreement is a broad-based agreement with the Office of Chinese Language Council International (HANBAN) of the People's Republic of China. This agreement targets numerous areas for collaboration.

2. A Memorandum of Understanding with l'Academie de Rouen, France was signed in December 2008. This Memorandum facilitates cooperation related to: common challenges in education; promoting the development of French and English language, competence and desirability to become proficient in both languages; supporting professional development of educators; promoting cultural understanding; and supporting international opportunities in business, cultural and professional exchanges.

3. An agreement with Alliance Francaise of the Government of France was signed in March 2009. The goal of this collaboration is to encourage, support and strengthen French language teaching and learning in Alberta, and to provide enhanced educational opportunities for students and professional growth opportunities for educators and opportunities to learn and appreciate French culture.

5. An Associated Centre of the Instituto Cervantes was granted in February 2009.

6. An official Spanish Resource Centre was granted from the Ministry of Education of Spain in May 2009, in collaboration with IISLE and the University of Alberta. As a result, IISLE now hosts a large collection of Spanish literature, cultural resources and language teaching and learning resources, in print, digital and multimedia formats.

7. A Memorandum of Understanding was signed in October 2008 with the Central Agency for German Schools Abroad (ZfA), and the Goethe-Institut Toronto. This facilitates cooperation in many areas, including professional development, cultural activities, resource acquisition, etc.

8. A partnership agreement with the Canadian Association of Second Language Teachers (CASLT) was signed in September 2008. This partnership includes collaboration with IISLE to co-host the first national conference for international languages in Canada, which was held in May 2009 in Edmonton.

9. In 2015, a Memorandum of Understanding was signed by Edmonton Public Schools and Qatar Foundation International.  The MoU guides collaboration on topics such as the promotion of Arabic language and culture, teacher language development and professional learning, and educational exchange opportunities.

10. Edmonton Public Schools has a long history of collaboration and support from Japan Foundation.